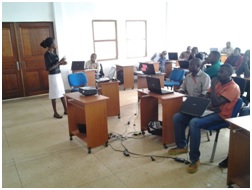 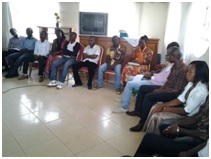 The IITA Youth Agripreneurs (IYA) representatives – Mrs. OlaniyiAjibola and Mr. BekeeBarituka – departed the IITA Head-quarters on Thursday, 27th march 2014 accompanied by Dr. Marie Yomeni for Lagos. The journey to Bukavu continued on the 28th of March with a stop-over at Kigali. On Saturday, 29th the duo arrived at their destination, being received by some executives of the IITA-KalamboYouth Agripreneurs (IKYA). There was lunch with the D.G. Dr. Sanginga, and a tour of the environs and the Lake Kivu, after which a welcome party was organized by the youths.
On Sunday, 30th March, there was an intense general meeting with the Officer-in-charge (O.I.C.) of the IITA-Kalambo station – Dr. Chris Okafor, Dr. Marie Yomeni and IKYA members to plan for a conference to be held on 5th April (Creating Jobs For Youth through Agribusiness). The conference would be attended by several stakeholders and would also be an avenue to officially launch the group here.
On Monday, March 31st, the IYA representatives were introduced to the IITA Staff at Kalambo and a tour round the institute was made.A presentation was made by IKYA coordinator – Mr. Eric Sika – introducing the group, its activities so far and achievements; IYA representativeAjibolaOlaniyi also made a presentation about the group and shared experiences with the IKYA members, which continued on Tuesday, 1st of April, reviewing together their business plan, production plans, marketing strategies, exploitable opportunities and other fundamental issues.
The IITA-Kalambo Youth Agripreneurs (IKYA) is a group of dynamic young graduates and students (including post-grad), 32 in number – 11 females and 21 males. The group is still young and thus faces the concomitant challenges of new organization, but with the right motivation and support, it promises to do exploits

The IITA Youth Agripreneurs are a group of young graduates involved in agribusiness, with the aim of being a unit that would serve as a model to other young people planning to venture into agribusiness and becoming the trainer of trainers.