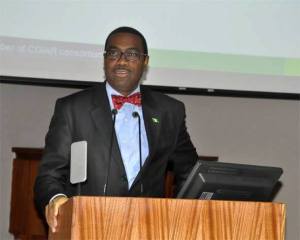 In a plenary session on youth issues and challenges, the Honourable Minister of Agriculture, Dr. Akinwumi Adesina, while addressing the participants, gave a little story of his ambition right from child hood. He said at age 14, he finished high school. After obtaining a form for admission into the tertiary institution _ University of Ibadan, his Dad kept  filling Medicine, Veterinary and Dentistry as a choice of course for his University degree. This was done for 3 consecutive years and the University management kept declining his offer, thereby offering him admission on agronomy. This was when his Dad accepted his fate to study agriculture in the university.

The Honourable minister stressed the fact that; to get young entrepreneurs like IITA Youth Agripreneurs (IYA), the University curriculum must be changed to accommodate a change in mindset of young future entrepreneurs from the grass root. He further highlighted some statistics which underscored his success in office as an Agriculture Minister because he was opportune to have his capacity built by IITA and some like organizations. Part of his office success story is that; in 2013, 10.5 million farmers was registered under the platform of Growth Enhancement Scheme (GES), 15 million was registered by 2014, 8 million farmers reached directly over mobile phone by 2013, thereby increasing livelihood of 40 million people. Over 30 bakeries in the country are now producing substitutes of cassava and wheat composite bread and that will save the country of 125 billion Naira every year from importation of wheat.

He pointed out that 65% of Africa land will feed the nation if drastic measures are taken place. He also sited an example of how modern successful and ultimately wealthy  a farmer should be viewed, using U.S.A and European farmers as examples and that he wants the youth to grow in that mindset and direction.

Concluding his address, he proclaimed by saying ‘we want to create next generation of agribusiness farmers’ and that he has invested interest in IYA’s success and finalized by pledging a sum of money to IYA for IITA to link the IYA Youth to greater companies so as to build their capacity, and that he himself wants to be a focus media on the IYA.

Blogpost by Johnbosco Ezemenaka, IYA member and a social media reporter for the #YADI14

The IITA Youth Agripreneurs are a group of young graduates involved in agribusiness, with the aim of being a unit that would serve as a model to other young people planning to venture into agribusiness and becoming the trainer of trainers.